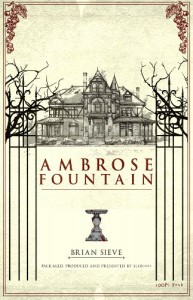 Not that that was necessarily a bad thing - I just never felt any sort of suspense or horror, because I could tell exactly where the story was going.

For all of that, it was an interesting read, and well written. The story flowed fairly smoothly, and while it wasn't scary, it was definitely atmospheric in its descriptions of the vineyard and the well.

Throughout the book, I couldn't shake the feeling that it sounded like a movie...like somebody wrote a horror movie that they wanted to be like The Shining. Turns out that's pretty much what it was. According to the author's note at the end, Ambrose Fountain is part of a project called Script Lit, which takes unpublished screenplays and turns them into novels.
Tweet