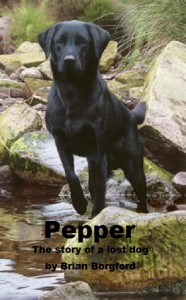 This would have been a cute, if dark, dog story - but I couldn't get past a series of editing errors.

At least, I'm assuming they were editing errors. I'm still trying to figure it out.

About halfway through the story, the dog, Pepper, gets taken to the pound by a dog catcher. Despite pretty constant assurances from the dog catcher that he's going to be put down any day now, Pepper gets adopted by a little girl who names him Blackie.

For the entire time Pepper is with the little girl's family, his name keeps changing. In one sentence, the girl will call him Blackie. In the next, she and her father refer to him as Pepper. Then he's Blackie again. And then he's Pepper...I'm pretty sure he should have been Blackie throughout the entire exchange.

Otherwise, this was a fairly depressing book. The dog gets kidnapped, strangled, shot, and then put in a dog pound where we're constantly told how any day now, Pepper will be killed because nobody will ever adopt him. And that's only half of the book.
Tweet